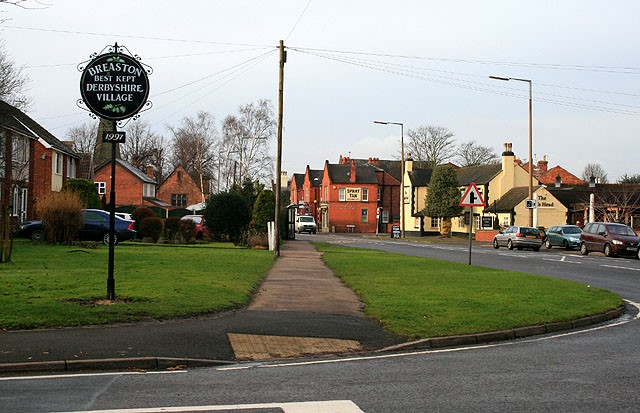 Robert Ellis sell many of the properties that are placed on the market within the popular Derbyshire village of Breaston, an award winning village which is located close to excellent transport links including J25 of the M1, East Midlands Airport and stations at Long Eaton and East Midlands Parkway.

Over recent years there has been a limited development of properties in the village with the sales of the small new sites being handled by Robert Ellis, who have a local office in Long Eaton. Recent developments have included three new detached bungalows on Wilsthorpe Road and six large detached 5 bedroom houses off Firfield Avenue on a prestigious development called Holt Croft. Further new developments of bungalows have taken place on Fern Close and at Western Mere on Draycott Road where two detached 3 bedroom bungalows and four detached houses were built.

Breaston has an active community spirit being awarded the best kept village in 1997 and the community groups such as Breaston in Bloom and the street leaders scheme, Breaston was awarded the RHS Gold Award for best in the small town category for the East Midlands in 2019.

Breaston was originally a farming community which over the past few decades has become a residential area which is popular for people who might work in either Nottingham or Derby. With a population now approaching 5,000 residents, the village has a range of housing from traditional semi detached properties on roads such as Stevens Lane, Lawrence Avenue and Grange Avenue through to large individual detached houses on and around the Poplar Road area where there are homes built on half acre plots which can now be worth in excess of £1m.

Things to do in Breaston

The centre of Breaston village is known as The Green and this is a designated conservation area with there being six listed buildings and several buildings of special character. The centre of the village provides short stay parking for people to be able to use the Co-op convenience store and other local shops with Anderson’s and Flinton’s providing coffee eateries and there is also Hoggs Bistro and three local pubs – The Chequers and The Bulls Head being found near the centre of the village and The Navigation being on Risley Lane as you leave the village heading towards Risley.

Breaston is approximately 8 miles from Derby and a similar distance from Nottingham and is only a short drive from Long Eaton where there are Asda and Tesco superstores and many other retail outlets as well as state and independent schools for older children which include The Wilsthorpe Academy, Long Eaton School and Trent College which also has The Elms School for younger children. The Firfield Primary School is found near to the centre of Breaston and this has an excellent reputation to help children start their formative years at school.

There is open green space within the village which includes Duffield Close village green in the centre of the village and Perkes Park recreation area which can be accessed from Longmoor Lane and Rectory Road. There is also the Golden Brook storage lagoon which is maintained by Derbyshire Wildlife Trust that is open for members to visit. There are also many walks in the surrounding countryside with a network of footpaths and bridleways radiating from the village with a footpath along the dis-used Derby canal along with large sections of the canal being opened by the Nottingham and Derby Canal Trust and there is also the coffin walk between Breaston and St Chad’s and nearby Wilne which as the name suggest was used in the years gone by to transport coffins between Breaston and the church graveyard at St Chad’s.

Robert Ellis are a well regarded local estate agency which sells and lets many homes in the Breaston and surrounding area.